The Communication Tip Every CEO Needs to Know

Researchers recently surveyed 65,000 employees to evaluate the state of communications between CEOs and those who work for them. According to researcher Rodney Gray, the results were not good news to senior executives who fancy themselves good communicators. 90% of employees didn’t feel their leaders were even aware of their concerns while 85% deemed their executive’s communication ineffective.

If you’re a business leader in a small or midsize company, you’re probably communicating with your team on a weekly–if not daily–basis. Where is the disconnect taking place? The answer has more to do with psychology than your public speaking ability.

In his New York Times Bestseller Blink, Malcolm Gladwell shines a light on the research of personality psychologist Samuel Gosling. Gosling conducted a study in which students’ personalities were evaluated by strangers and close friends. The close friends were given a questionnaire about people they’d known for years.

What does this have to do with office space? It indicates the configuration of your space can communicate more than your direct communications do. For business leaders, this discovery affects more than the friendships evaluated in Gosling's study.

Dr. Albert Mehrabian discovered that communication had far less to do with word choice than one may initially imagine. Only 7% of what your employees believe about their position in your company has to do with what you verbally say to them. The other 93% has to do with the nonverbal communication being placed before your employees through the space in which they’re asked to work. Your furniture, lighting, layout and configuration do far more to communicate your mission and vision statement than a couple posters on a wall. It turns out space is the body language of the workplace.

Are you asking employees to go above and beyond the expectations placed on them while handicapping their attempts to do so with furniture and layouts that don’t support those goals? The implication of Gosling’s study was rating the abilities of friends or strangers to identify an individual’s personality. The implication in the workplace is whether or not a leader can build a company that accomplishes significant organizational goals.

Space is the body language of the workplace

According to Mehrabian's research, the space where employees work to accomplish the organizational mission and vision is instrumental in helping meet those goals. The furniture and layout of your workplace contributes to 93% of the influence on the identity of your company and the implied expectations of behavior exhibited by your employees professionally and socially.

What can you do? The survey of 65,000 employees gave some information on this as well. It showed that employees placed a priority on being involved in the process of making workplace decisions (including spatial decisions). Have you started the conversation with your employees about their overarching role in your company? Whether you’re aware of it or not, the answer is yes. You’re answering your employees’ questions about your company every time one of them steps into your offices. The environment you create with office furniture, flooring and architectural walls does more to determine your company results than any speeches you give.

The furniture in your office will do most of the talking when it comes to answering these three questions: 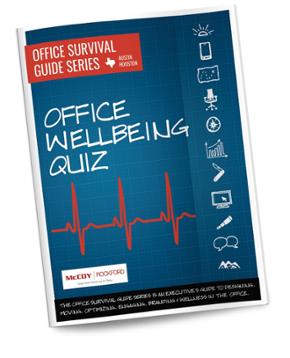 How well is Your Office?

Find out with our Office Wellbeing Quiz!